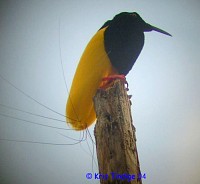 In such a country and among such a people, are found these wonderful productions of Nature, the birds of paradise, whose exquisite beauty of form and color and strange developments of plumage are calculated to excite the wonders and admiration of the most civilized and most intellectual of mankind, and to furnish inexhaustible materials for study to naturalist, and for speculation to the philosopher." Alfred Russel Wallace, The Malay Archipelago, 1869

West Papua (previously known as Irian Jaya) offers some of the best birding in the world. Located on

The land is very rich in plantlife, many species of orchids and a paradise for marsupials, such as the Tree Kangaroos, Bandicoots, Ring-tailed possums, Cuscuses and Wallabies. Reptiles include many species of Snakes, Crocodiles, Sea Turtles such as the giant Leatherback, Frill-necked and Monitor Lizards and the longest Varanid species on the planet. Dugongs may be found offshore and the Spiny Anteater inhabits the interior. Insect life is abundant, many colorful butterflies and hosts over 800 species of spiders alone. The Province offers unspoilt, world-class underwater marine life, the best in the world according to Conservation international marine survey 2001